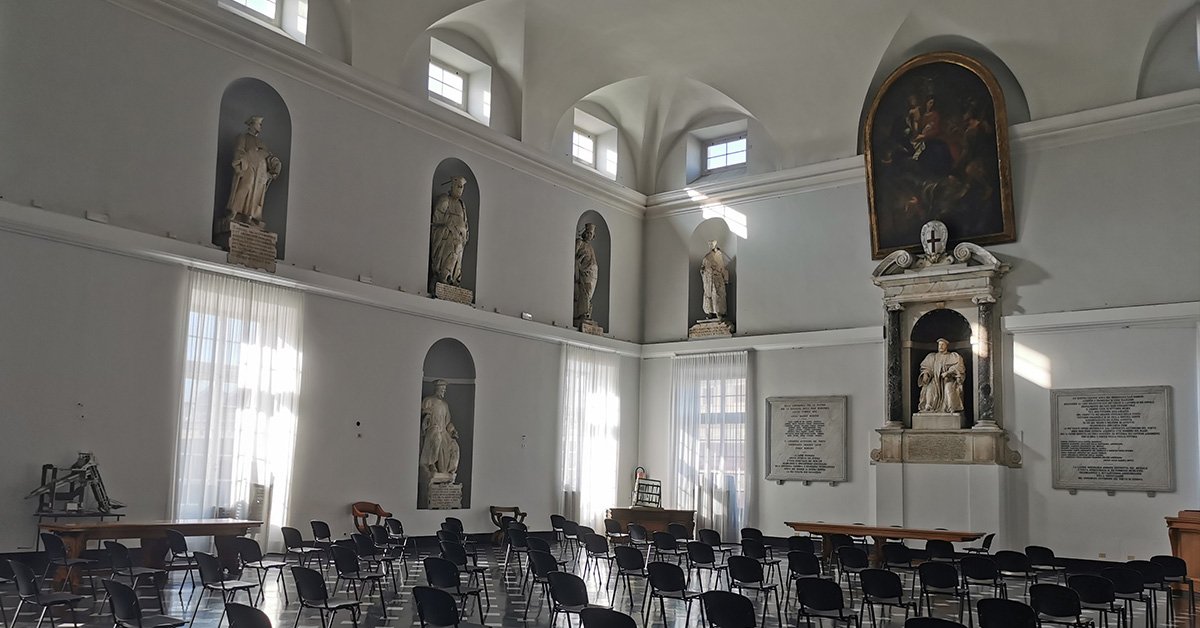 From the top of the grand staircase, designed by architect Marco Aurelio Crotta, you enter Sala delle Compere, also known as Sala delle Congreghe, a grandiose space whose construction was commissioned by the Bank of Saint George in the 15th century to house the Grand Council, composed of about four hundred members.

At the time of the Bank, the desks of the office of the general treasurer and the notaries in charge of drawing up the documents and keeping them were lined up along the perimeter of the Room. Today, the walls are still divided into two levels of overlapping niches, separated by a white frame that is interrupted only at the central aedicule, which contains the statue of Battista Grimaldi. The marble statues represent the protectors of the Bank of Saint George.

The Room hosts – among other things – Domenico Piola’s painting depicting Saint George in adoration of Our Lady Queen of Genoa, two paintings dating back to the 15th century and two famous plaques, the first reproducing the letter written by Christopher Columbus to the Lords of the Bank of Saint George, the second dedicated to the first day of the Genoa Conference, held in the Palace in 1922.

The Bank of Saint Georgehonoured its benefactors by entrusting the most famous sculptors of the time with half-length or full-length tombstones or effigies (standing or sitting) depending on the size of the donation made to the Bank. Many of the statues, which are placed on two rows of niches and on three sides of the room, currently appear mutilated and damaged. During the Second World War, Palazzo San Giorgio and especially Sala delle Compere were almost completely destroyed by the bombing of Genoa and its port in 1942.

Below is a list of the Bank’s benefactors represented by the statues and their authors.

Statues by anonymous or lesser artists

In the past, it was the vestibule of Sala delle Compere or Congreghe, although it was already part of Palazzo del Boccanegra before the 16th-century enlargement. The hall is decorated with four marble statues sculpted by Gian Giacomo della Porta and Bernardino di Novo.

In the middle, on the right side, the grandiose black stone portal with a marble bas-relief of Saint George, the 16th-century coat of arms of the Bank, stands out.

The most famous sculptors

Taddeo Carlone (Carloni) – The son of Giovanni was born in Rovio (Mendrisio) near Lake Lugano in 1543. He followed his father, a sculptor, and his brother Giuseppe to Genoa halfway through the century. In 1574, he built together with Bernardino da Nove and Gian Giacomo Valsoldo the funerary monument of Ceba Doria in S. Maria della Cella in Sampierdarena, and in 1576 he did that of Gian Battista Doria (in the same church). In 1575, he worked on the decoration of the façade – the masks and the portal – of Nicolò Grimaldi’s palace, then on Doria Tursi (Genoa, via Garibaldi) and the villa in Fassolo on behalf of Giovanni Andrea Doria, for whom he continued to work in the following years. In 1578, the artist received a commission from the Fathers of the Commune for the fountain in Piazza Soziglia; during the plague of 1578-79, he withdrew to the convent of S. Francesco in Castelletto (destroyed in 1798), where he designed and built six chapels in the left aisle of the church.

Giovanni Giacomo Della Pòrta – Sculptor and architect (Porlezza 1485 approx. – Genoa 1555). He started working in Genoa in 1513; he then worked in Cremona (sarcophagus of Saints Peter and Marcellino in San Tommaso) and became the architect of the Cathedral of Milan from 1524 to 1528. Back in Genoa (1531), he carried out a series of works together with various helpers (ciborium and altar of the chapel of St. John the Baptist in the Cathedral, two statues for Palazzo San Giorgio, etc.).

Bernardino di Novo, son of Matteo, was active in Genoa in the middle of the 16th century, often in collaboration with Taddeo Carlone and Giovanni Giacomo Paracca da Valsoldo. Together with Giovanni Carlone, he sculpted the statue of Cattaneo Pinelli, located in the hall of Palazzo Tursi.

It is a letter by Christopher Columbus addressed to the Bank of Saint Georgewith the offering of tithes* to that Institute (1502).

*A tenth of the harvest, of the net production of the land, of the income from other activities, paid, as the times and customs dictate, as a tribute to the private owner, to the feudal lord, to the state, to the (ecclesiastical) church, or even (as was customary among the ancient Greeks and Romans) to the local divinity.

The plaque commemorates the holding of the 1922 Genoa Conference in Palazzo San Giorgio. Said conference was attended by the main representatives of European governments, including those of the countries that had been defeated in the First World War. The most important figures attending the Conference included British Prime Minister Lloyd George and the Ministers for Foreign Affairs of the Weimar Republic and the Soviet Union, Rathenau and Čičerin.

** Domenico Piola (Genoa, 1627 – Genoa, 8 April 1703) was an Italian painter, one of the main exponents of Genoese Baroque. He was the son of fabric merchant Paolo Battista and the brother of painters Pellegro (1617 – 1640) and Giovanni Andrea. His paternal uncles were Giovanni Gregorio and Pier Francesco, also painters. Initially, he was an apprentice in his brother Pellegro’s workshop, and on this latter’s death he moved to the workshop of Giovanni Domenico Cappellino.

15th-century pictorial composition depicting the Angel of Peace holding up the coat of arms of Genoa, flanked by the representations of Fortitude and Justice

*** The coat of arms of Genoa – It is the flag of Saint George, a red cross on a white field, the symbol of the Republic of Genoa, the use of which has been confirmed – at least – since 1113. In the Middle Ages, the flag symbolised the Saint who defeated the dragon and accompanied and protected the soldiers involved in the Crusades. The Genoese, who operated under the Saint’s banner, were able to distinguish themselves in the war to such an extent that the Muslims only needed to see the flag with the cross off the sea to keep away from their vessels. This feat prompted a medieval power such as England to ask for permission to “borrow” the flag of Saint George in Genoa in order to hoist it on its ships. As a result, as of 1190, the flag of Saint George went on to protect also the English fleets on the move in the Mediterranean area.

15th-century pictorial composition depicting the coat of arms of the Bank with Saint George the Fighter.

**** DE FERRARI, Francesco (also known as Francesco da Pavia) – Son of Bartolomeo, he was presumably born in Pavia around 1454 (Alizeri, 1873, II, p. 86) and practised the art of painting in Genoa, where he arrived very young and obtained citizenship in 1479. Information about him is often reported by Genoese sources (almost all published by Alizeri) for a period of time ranging from 1476 to 1495.