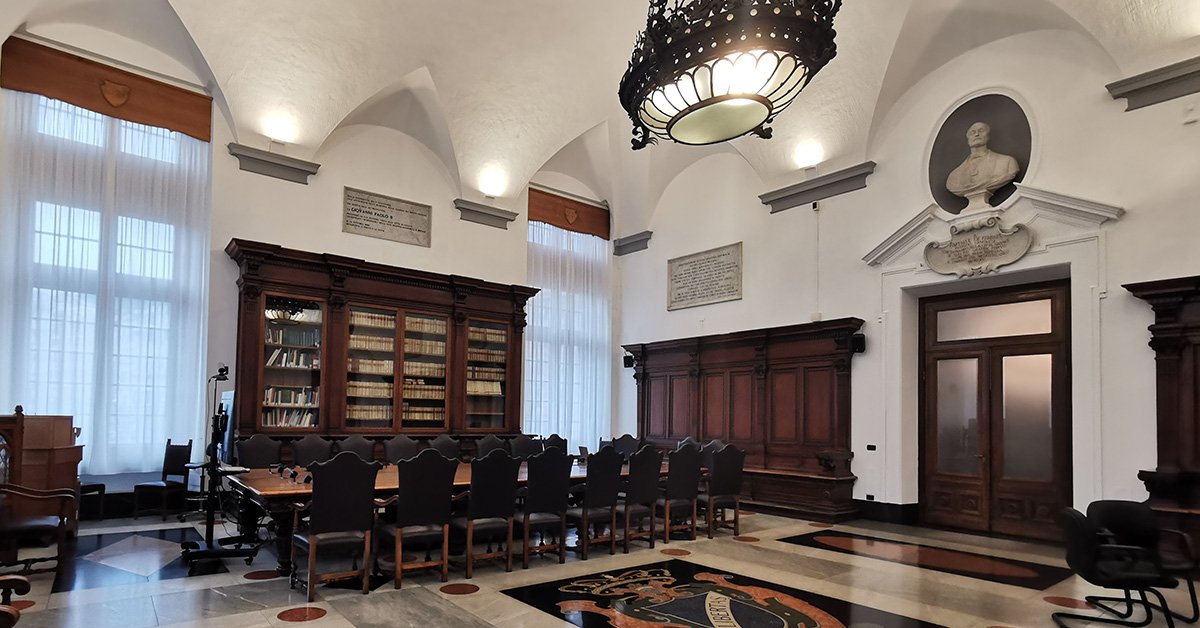 Sala dei Protettori dates back to the enlargement of the Palace in 1508 and features the same architectural style as the other boardrooms. Today, the room, where some of the most valuable works of the entire building are located, gives direct access to the office of the President of the Western Ligurian Sea Port Authority and hosts the meetings of the top management of the Authority and its Steering Committee.

The Virgin with Baby Jesus and Saint George

It is a lunette-shaped canvas showing Saint George wearing a breastplate in the foreground and, in the background, the Virgin Mary with Baby Jesus. At present, the painting is kept in the office of the President of the Authority. According to the records, the painting, before the restoration of the Palace at the end of the 19th century, was located on the second floor, in the Archive of the Bank of Saint George. It is not clear who the author is: in the first edition (1866) of the Artistic Guide to the City of Genoa (Guida Artistica per la città di Genova), Federico Alizieri attributed it to Domenico Fiasella, while in the second edition it was attributed to G.B. Carlone. The painting was transferred to the State Archives at the end of the 19th century in order to enable D’Andrade to restore the palace and was subsequently brought back to Palazzo San Giorgio in the early 20th century. During this last transfer, a note with “17th-century writing” bearing the name of Luciano Borzone was discovered on the back of the canvas. Recently, Crespi has been included among the possible authors. In recent years, the recent exhibitions on the Caravaggesques and Orazio and Artemisia Gentileschi, as well as the quality of the painting, especially with reference to significant parts (see the hands of Saint George and the figure of the Saint himself with respect to the Virgin) have raised the question of there being at least two different authors. Further food for thought is provided by Orazio Gentileschi’s presence in Genoa during the time period when the painting was made, his documented friendship with Luciano Borzone and the surprising analogies with the figure of Valeriano in Gentileschi’s Vision of Saint Cecilia, still preserved in Brera. These and other reasons have given rise to the need to gather as much information as possible in order to draw the attention of critics to the authorship of the painting, which could be reconsidered.

*The period between about 1528 and 1630 is known as the Genoese century: indeed, in this period, the Republic of Genoa not only confirmed its role as a crossroads of maritime traffic between East and West, but also saw its weight in European politics grow considerably. Moreover, the Superb had become a very important artistic hub in Europe. Indeed, many of the greatest artists of the time, both Italian and foreign, in particular Orazio Gentileschi, Pieter Paul Rubens, Antoon van Dyck, and Mattia Preti, worked and carried out experiments in Genoa.

The Virgin with Baby Jesus, Saint John and Saint George

The painting is attributed to Giovan Battista Paggi** and depicts the Virgin with Baby Jesus, Saint George and Saint John the Baptist in adoration. The bottom left of the painting shows the Palace in the first decades of the 17th century, with the façade frescoed by Lazzaro Tavarone. In the painting, there are two coats of arms, that of Our Lady Queen of Genoa and the older one of Saint George. Today, it is preserved in Sala dei Protettori, above the Della Porta fireplace.

**Giovan Battista Paggi (1554/1627)  trained with Luca Cambiaso, with whom he entertained a long relationship; he was forced to leave Genoa in 1580 and moved to Florence, where he worked for the Medici for about twenty years, reaching a prestigious position. Upon returning to Genoa around 1600 with a solid reputation, he established himself for over a decade as an authoritative exponent and leader of a significant branch of local painting. The works produced after his final return to his homeland include the Martyrdom of St. Ursula and the Virgins in the Cathedral of Savona, which can be dated around 1600, Venus and Amor in Palazzo Bianco, and the Flagellation, dating back to the time of the Ligurian Academy’s Our Lady of the Rosary, also in Palazzo Bianco. Many of his paintings are found in the churches of Genoa, such as the Death of St. Clare in Santissima Annunziata, the Nativity Scene in Albergo dei Poveri, and the Communion of St. Jerome in San Francesco da Paola.

The most precious work in Sala dei Protettori is the fireplace made by Giacomo Della Porta* presumably in 1554. The mystery of fire provides the inspiration for the decoration of the fireplace: fluted half-pilasters ending in lion’s paws rest on a square plinth adorned with lion’s heads; the half-pilasters support a fine lintel, at the centre of which, between two friezes of stylised flames, lies an engraved plaque with the motto “Quid magis potuit”. Two urns are located on the sides of the lintel; in the centre, there is a triangular trophy flanked by two female figures. The fireplace is surmounted by the representation of Thundering Jupiter**. The medallion features a bas-relief showing the sacrifice of Mucius Scaevola***. The last restoration of the fireplace dates back to 2008.

*GIACOMO DELLA PORTA He was a member of a family of sculptors from Como and probably started out as a plasterer. He made his first works in Genoa. His presence in Rome is documented as early as 1559; he initially collaborated with Guidetto Guidetti on the works in the Campidoglio, in the Basilica of Saint Mary Major and in Palazzo della Sapienza. He established himself with the election of Gregory XIII (1572-85); during this latter’s pontificate, he built the Gregorian Chapel in St. Peter’s and the church of Santa Maria ai Monti (1580), and worked on the façade, dome and chapels of the Church of the Gesù (1573-75). Under Pope Boncompagni, he undertook a series of works for the construction of fountains in Piazza dell’Aracoeli, Piazza Colonna, Piazza Navona, Piazza del Popolo, Piazza della Rotonda and Piazza Mattei (the famous Fountain of Turtles). Under Sixtus V (1585-90), he worked, together with Domenico Fontana, for the completion of Michelangelo’s Dome (1588-90) in the Vatican Basilica, which had remained unfinished after Buonarroti’s death. In those years, he also worked in San Luigi dei Francesi, in the Campidoglio (façade of Palazzo Senatorio, stairs and kerb) and in San Giovanni dei Fiorentini. He stopped working under Clement VIII, with Villa Aldobrandini in Frascati and the Aldobrandini Chapel in Santa Maria Sopra Minerva (1600-02).

**The most important god of the Latin pantheon derives from a celestial supreme being of the Indo-European tradition, as demonstrated by his name, taken from a root indicating the sky, and his epithets, such as Light-bringer, Lightning-maker, Thundering, and Rainmaker. He was thought to be the supreme regent of the world, worshipped on the summits of mountains, and invoked as a guarantor of pacts, oaths, borders and laws. Latin cities adopted him as a symbol and guarantor of confederal political unity. In addition to the Capitoline Temple, his oldest temples were the one dedicated to Jupiter Feretrius (also on the Capitoline Hill) and that of Jupiter Stator, near Porta Mugonia, on the way to the Palatine. Jupiter formed an ancient triad together with Mars and Quirinus; the one with Minerva and Juno, worshipped in the Capitoline Temple, was more recent.

***Gaius Mucius Scaevola (real name Mucius Cordus) is the protagonist of a well-known Roman legend from which the saying “To put one’s hand on the fire to show how sure one is of something” is derived. It is said that in 508 B.C., during the siege of Rome by the Etruscans commanded by Porsena, the situation had become hopeless for the city: food supplies were becoming scarce, the population was exhausted and the troops were demoralised. Young aristocrat Mucius Cordus volunteered to kill the Etruscan commander before the Senate.