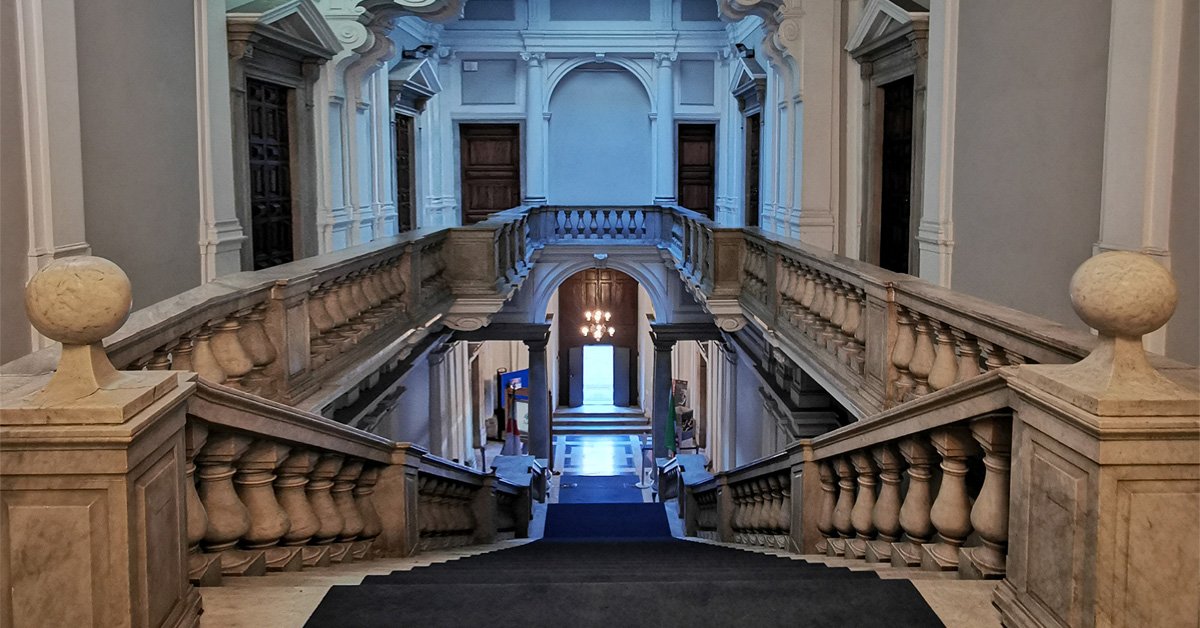 The heraldic emblem of the conservatoris maris, assigned to the Autonomous Port Consortium by royal letters dated 2 December 1926, is kept in a case in the hall.

At the request of the Autonomous Port Consortium, founded in 1903, the entrance portal on the sea side was opened. Architect Marco Aurelio Crotta*, on commission of Alfredo D’Andrade, designed the staircase leading to Sala delle Compere. The ancient ‘sacristies’ of the Bank were sacrificed to open the staircase, but most importantly, the building’s orientation was reversed for it to face the port rather than the city for the first time in its history.

*MARCO AURELIO CROTTA Born in Genoa (1861-1909)
Marco Aurelio Crotta, who was born into a family of humble origins, left school early and started working as a workshop assistant. Given his predisposition for drawing, some friends encouraged him to resume his studies and helped him financially, in particular architect Giovanni Campora, thanks to whom he was able to attend the Ligurian Academy of Fine Arts and obtain a diploma as an architect. He began his activity collaborating with Campora himself, especially in the restoration of buildings. Because of his skills as a draughtsman, he was commissioned by Alfredo D’Andrade, who had been the delegate for the Conservation of the Monuments of Piedmont and Liguria since 1884, to carry out the surveys and restoration projects for numerous buildings in Liguria and Piedmont. In the 1890s, he collaborated with D’Andrade, who greatly appreciated his profound knowledge of medieval art, on the restoration of Palazzo San Giorgio and the Cathedral of Saint Lawrence in Genoa.