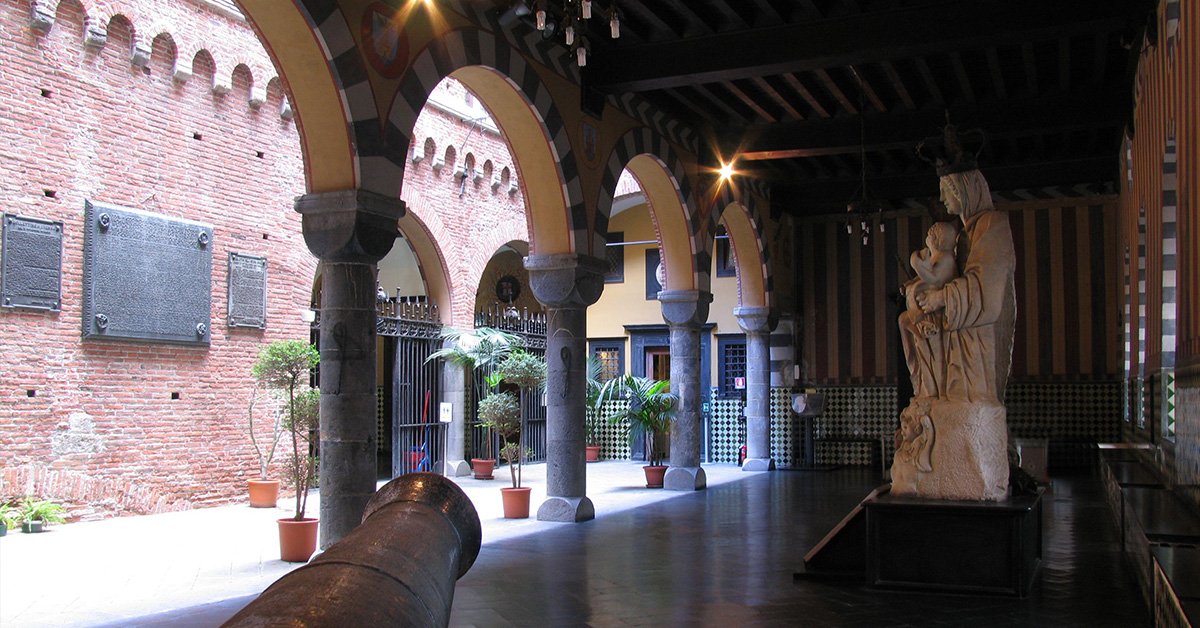 The loggia is composed of an internal rectangular body, from which the second floor can be accessed, and two side loggias. The wall decorations of the loggias are composed of small white, green and black square tiles. Yellow and white fresco paintings begin where the tiles end, edged by a frieze with the coats of arms of the noble families of Genoa and the notables of the Bank. Slate benches are placed along the side loggias. The ceiling is made of wooden beams. The loggia houses some of the most valuable works of the Palace, which are listed and described below.

Our Lady Queen of Genoa

The statue of the Our Lady Queen of Genoa was sculpted in the first half of the 17th century by Bernardo Carlone.

Following the damage caused by the Second World War bombings, it was restored in 1952 and placed at the base of the Pilots Tower during a solemn coronation ceremony, which was very important for Genoa.

In 1998, following the relocation of the pilots to the new structure in Molo Giano (which tragically fell in the 2013 accident), it was decided to place the statue inside Palazzo San Giorgio in order to preserve it from damage caused by salt and atmospheric agents.

Two plaques are found on the wall, next to the painting of Saint George on foot. The first was taken from the Castle of Lerici* (1251) and therefore Pisa, while the second (1632) admonishes the Bank’s officials not to take any bonuses on top of taxes, as does the plaque placed at the back entrance to the Palace.

On the lintel of the black stone portal on the back of the Loggia, you can read the words “Officium MDXXXI instauravit”.

In the second loggia on the left, there are the same decorative motifs as the walls and ceiling, and portals with the coat of arms of Genoa, which date back to the 16th-century restoration. The door frames with the coat of arms of Genoa and Saint George in the style of Michele D’Aria date back to the end of the 15th century and the beginning of the 16th century.

In the Loggia, there is also a bronze plaque commemorating the harbour workers who died during the First World War.**

*The Castle of Lerici is a polygonal fortification that dominates the rocky promontory of the bay of Lerici, in the province of La Spezia. The castle began to be built in 1152 and was subjected to numerous transformations by the maritime republics of Genoa and Pisa, which, due to its strategic position, fought over it.

THE HOLES FOR LETTERE ORBE

Saint George on foot – Derived from an example of Aosta Valley painting from the Castle of Fenis and complemented by two verses by Carducci, made during the restoration carried out by Alfredo D’Andrade.

Giosuè Carducci  (1835-1907) was a classicist poet and politician par excellence. He authored six poetry collections: Rime, Poesie, Odi barbare, Giambi ed epodi, Rime Nuove, Rime e ritmi. In 1906, he was awarded the Nobel Prize for literature. The poet strenuously advocated the preservation of Palazzo San Giorgio, which some wanted to be demolished due to the fact that it was an obstacle to the development of the Genoese road system from west to east.